MOTOFIL celebrates 30 years of partnership with FANUC, the largest producer of industrial robots. This partnership allowed the development and installation of more than 2,000 robotic cells worldwide.

The partnership between the two companies dates back to 1991. MOTOFIL was looking to change its range of products from electric motors to the development of robotic solutions. The goal was to help companies automate their production processes.

“Since we got to know robotics, we have been thinking about FANUC”, recalls João Carlos Novo, current Chairman of the company. “It was a project that always pass the idea that it was fighting to develop the best robots in the world. Regardless of the project and the size we had at the time, we knew that this was the way to go.”

The first cell with a FANUC robot installed in Portugal was in Leiria, in a company dedicated to the development of metallic structures. In this first project, MOTOFIL only served as an intermediary; the development and installation of the equipment was made by another company. By investing in an innovation and development team, MOTOFIL quickly began to market and install robotic cells under its own brand. As trust in the products grew, the list of requests also grew, as did the brand awareness. Today, the company develops robotic solutions worldwide adapted to the needs of each customer.

As for the future, the Chairman of MOTOFIL states that “our partnership is strong. There is no reason for us not to maintain the success we have been achieving. We have built an excellent relationship, both personal and professional, with FANUC Europe and FANUC Japan. We have to recognize that we were lucky on having selected FANUC and, for both we and our customers, believe that the FANUC robot is the best in the world. Whether in technology, or in the product itself, or in the technical solutions presented. The evolution they have had over these years has made them true leaders and for us it is an asset to have them on our side.” 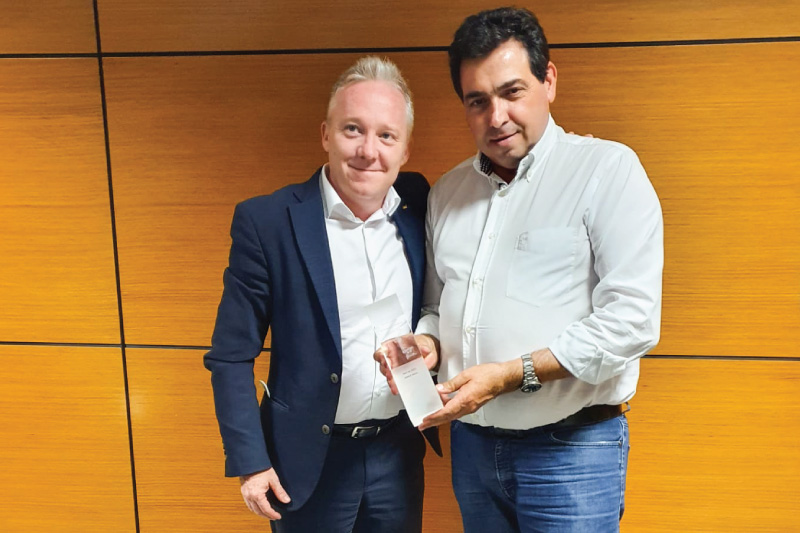 / FANUC Ibérica's Director, David Trabal, was at MOTOFIL to congratulate the company for its 40 years.